500 singles and a brief history of Sunderland record shops

I thought I’d start this blog with something a little bit different – a musical history lesson. Or to be more accurate a little bit of detail to let you know where most of the ‘500 Singles’ came from. Now my memory is not too great but almost all of the discs came from record shops in Sunderland (with the exception of ELO’s ‘Sweet talkin’ woman’ which was bought in Keswick while on a school trip, XTC’s ‘Towers of London’ bought in Nottingham (Virgin I think), a handful bought in Whitby while at Scout camp and the odd one or two from shops in Newcastle).
At the time (late 70s to mid 80s) the record shops that I can remember in Sunderland went something like this;
The Record Rack – a second hand record shop in Hylton Road, within walking distance of our house. I loved this place and it had a major effect on my musical tastes for the short time that it traded. This is where I traded in my Yes, Genesis and Rush LPs for Magazine’s ‘Play’, Penetration’s ‘Moving Targets’, X-Ray Spex’ ‘Germ-free Adolescents’ and the first three Roxy Music LPs. I got loads of singles in here too, and even once found a copy of ‘Reward’ by The Teardrop Explodes on the pavement when halfway home from here. They used to fold bigger brown paper bags into 7” single sized covers and stamp ‘Record Rack’ on them with a rubber stamp.
The New Record Inn – A brilliant shop in Sunderland’s High Street (beside the legendary ‘Old 29’ pub) that sold ex-jukebox singles without middles (I now know that this is called ‘dinking’ apparently) at 10 singles for £1. They also seemed to be the only shop in Sunderland that sold Crass singles, but as one had a picture of rubber sex doll on the cover I never bought any! (in fact I used to hide my Boomtown Rats ‘Tonic for the Troops’ album because one track had the word ‘bugger’ on it! This may also explain why I was one of the last people I knew to own a copy of ‘Never mind the bollocks’). Both the New Record Inn and the Old 29 were demolished many years ago.
The Spinning Disk – This shop in Derwent Street (or Olive Street I could never remember which was which!) was a…….CHART RETURNS SHOP. If you ever wanted coloured vinyl, picture discs, T-shirts, double pack etc, etc, this was the place to get them.
Bergs – On the corner of Blandford Street and Maritime Terrace, the owner used to buy imported LPs and sell them cheaper than the other record shops in the town. My Spanish import of Genesis’ ‘Trick of the Tail’ came from here (which I later traded in at Record Rack) as did my copy of Blondie’s ‘Parallel lines’ (which I’m pleased to say I still have!). Incidentally just around the corner from Bergs was Josephs, the toy shop that didn’t like children to visit.
WH Smith – Beside the railway station, this was never the first choice for records, but I did once return three copies of Elvis Costello’s ‘Armed Forces’ there when they all jumped on my record player. It was also the place where I bought Spandau Ballet’s 12” single of ‘To cut a long story short’ on its first day of release, encouraged to do so by Radio 1 DJ Peter Powell. I was an avid listener to the old 275-285 mw in those days.
Woolworths – Also gone now of course, Woolworths was more of a chart singles only shop, but of course once singles dropped out of the chart Woolworths were keen to shift them fast and cheap!
HMV – In High Street at the time (in The Bridges now) and the only one of the shops on this list that still sells music. Once, just after the release of Scritti Politti’s fantastic single ‘The Sweetest Girl’ I visited HMV when they happened to be playing it. One of the learned assistants told another “It’s not as good as the old Scritti though is it”. For a while my only real ambition was to work in this shop (and not in Laws stores on Southwick Green as I did at the time) 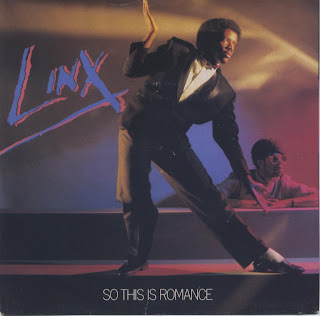 Anyway back to the list I suppose! Pages 8 and 9 clearly include a major numbering mishap as you can see. They also include the usual suspect list of classics, lost masterpieces, guilty pleasures (a phrase not used at the time of course!) and downright embarrassments. Time has been kind to some (Joy Division, Lori & The Chameleons, Magazine for example) and not so kind to others (King Trigger, Marilyn and Multivizion)
There are lots of instances on these two pages where I only owned one single by a particular artist, although for many I have since corrected this sorry situation. Page 8 continues where page 7 left off, with Tom Jones (two of them), Joy (who?), only one by Joy Division (in my defence I had a few Joy Division 12” singles though), The Kalin Twins (‘When’, obviously), two by The Kane Gang (who were local heroes), Mick Karn’s ‘Sensitive’ (still one of my all-time favourites), Jane Kennaway, Nik Kershaw (2), Kid Creole & The Coconuts (also 2), King, King Trigger, Kraftwerk, Die Krups, Landscape (the classic ‘Einstein a go-go’), David Lasley, Thomas Leer, Leisure Process, Linx (2), Little Anthony (‘Tears on my pillow’ – my love of Doo-wop started early!), Little Tom (a sort of punky Tom Jones impersonator), Lori & The Chameleons (2), The Lurkers, M (3) and finally Billy McKenzie. A pretty strange mixture I think you’ll agree. 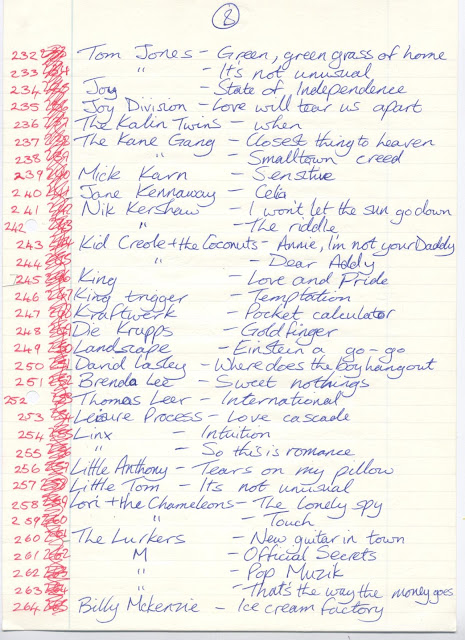 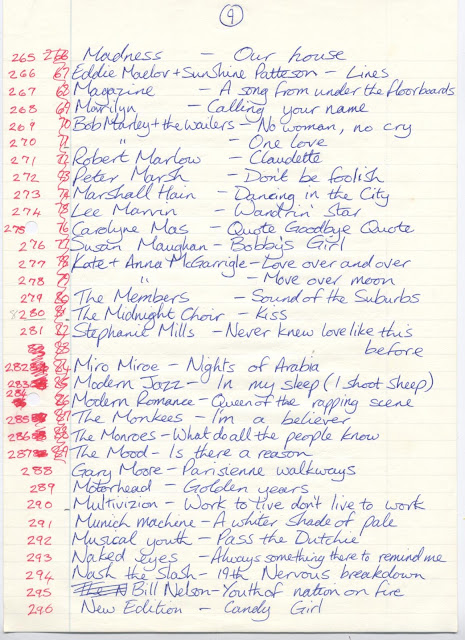 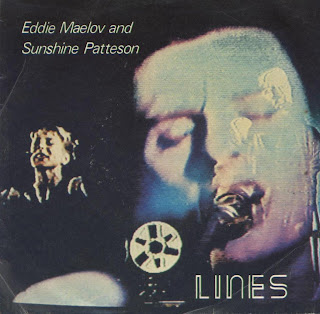 That’s all for now – another post soon, hopefully. Incidentally The Icicle Works’ Birds fly (whisper to a scream) on the record player as I type.

If you're so inclined you can buy my Kindle book 'The Great Cassette Experiment - The Joy Of Cassettes' where I ramble my way through 130 albums of the '70s,'80s and' 90s.

If you're in the UK, simply take yourself to
http://www.amazon.co.uk/gp/product/B00FN7XQT2