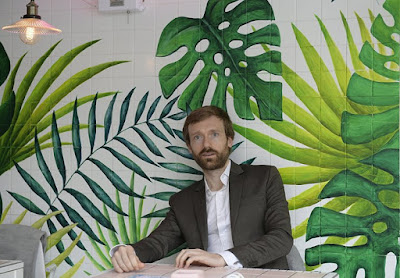 I was at MIMA, Middlesbrough on the evening of Saturday 2nd December 2017. I want to make sure that we have that on record.

There were others there too. David Thomas Broughton (jeans, jumper, scarf, beard) stepped onto the stage without fanfare; a stage constructed under the stairs in the black, white, grey and glass foyer. A bright, multi-coloured curtain serving as a back-drop in an area almost certainly more used to storing stacking chairs than hosting gigs.

This gig is all about atmosphere. All about the experience. Songs start sweetly and, via various combinations of loops, whistles, rattling loose change, electronic blips (somewhere between feedback and the sound of the air being squeaked out of a balloon) and a small electronic toy megaphone, collapse beautifully in upon themselves. At times it’s like listening to two radio stations, nestled closely on the dial, tuned in together, battling gently for dominance. These are slow, gentle, glorious, almost self-sabotaging, descents into mayhem. Tunes are sometimes spectacularly rescued before slipping away again, only to flip beautifully into the next.

David’s magnetic, occasionally unnerving, stage presence and his tendency to move from one track to another without pause leaves no space for applause until the entire set is over. It’s almost as if the audience feels that applause would be an inappropriate way to break the atmosphere. At one point David balances precariously on the rear left hand corner of the stage. Later he becomes deliberately entangled in his own microphone cable. David also uses his miniature megaphone to fantastic effect, occasionally using it to replace his microphone but, more often, pipping it percussively and looping it repeatedly until it sounds like a choir of Clangers.

At times he leaves the stage beneath the stairs altogether and steps toward us, singing dramatically and mournfully toward the corrugated roof 50 feet above our heads. There’s every reason for the sound quality to be challenging in such a unique venue, but the purity of the performance and the priceless work of the sound engineer mean it’s actually astonishing.

Choosing highlight songs seems a touch futile, as every moment is shot through with magic, however ‘Nature’ and ‘Liberazione’, when David forgets the words and ad-libs a few lines admitting to such, were my own personal favourites.

Ultimately, however, it’s all about the intensity of every minute, the overwhelming joy of the experience. The simple act of being able to say you were there.