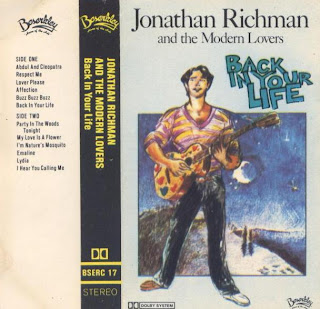 And they said it wouldn’t last!
On day 100 of the cassette experiment you’d expect me to be listening to something pretty special and – guess what? – I am!
Our cassette experiment subject on day 100 is probably the best album ever recorded, although I fear that not many people will agree. In fact, after 34 years of loving this album I’ve never met one single other person who considers it to be the best ever.
But, here goes anyway. Unless you’ve missed it writ large at the top of this page, our album today is ‘Back in your life’ released way back in 1979 by Jonathan Richman and The Modern Lovers.
It’s short and it’s sweet. It’s funny and it’s stupid. It’s knowing and it’s naïve.
The album opens with the yearning love song ‘Abdul and Cleopatra’. In which Abdul hasn’t seen the object of his affection for almost a year and he’s starting to wonder ‘where she’s at-ra’. It’s the kind of rhyme that only Jonathan could pull off.
Listen in wonder when Jonathan royally fluffs his lines on ‘Respect me’, a tale in which he wisely checks the room for ladies before telling his male friends how he’s going to make his woman respect him. Part of his plan seems to involve singing ‘Hi-ho silver’ repeatedly.
Gasp in awe as Jonathan wanders unselfconsciously into the Doo-wop classic ‘Buzz, buzz, buzz’.
Shed a little tear as Jonathan pleads to be taken back by his onetime girlfriend on the album’s title track. Part of the plan seems to involve Jonathan referring to himself in the third person (annoying when perpetrated by sportsmen and women, but endearing here) and trying to enlist his ex’s parents to help to persuade her that he deserves another shot. Maple syrup also appears to be involved.
But it’s in the album’s last three tracks that its heart truly lies. Two girl’s name tunes, the touching courting song ‘Emaline’ and the doo-wop ‘Lydia’ pave the way for the best track on the album, the boys take on a heartbreaking tune from 1908, ‘I hear you calling me’. A song to a departed lover so full of sadness that Jonathan’s (always slightly ‘crackly’) voice almost gives out completely at one point of deep emotion.
If you’ve never heard this album before then I guarantee your life will be changed forever by it.
I’m not allowed to listen to it while Suz is in the house though. She doesn’t like it.
Label – Beserkley
Year – 1979 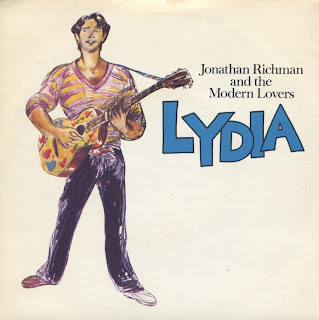 You can now buy the Kindle book ‘The great cassette experiment - The first 40 days' by following the link below;
http://www.amazon.co.uk/dp/B00CJ9X7R8
It's only 99p!
or, if you like (there's no obligation mind), you can subscribe to the blog on your Kindle – Just look up 'For the love of vinyl (….and cassettes!)’ and sign away 99p a month and Bob's your mother's brother.
Posted by Unknown at 04:00