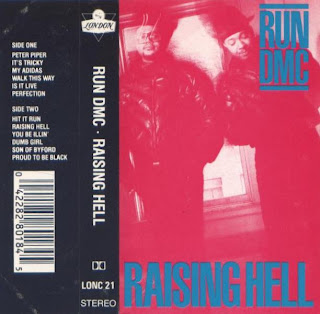 I think we’ve pretty much established beyond a reasonable doubt that I have no musical talent whatsoever. My ill-fated period as tuba player in the school brass band was perhaps my finest musical hour, but set against the yardstick of some unproductive piano lessons at age 10, ‘Three blind mice’ squeaked on the recorder at age 12 and an undeniable failure to master ‘Streets of London’ on the guitar at age 16, we’re not really saying too much.
There is, however, one track on today’s cassette of the day that regularly threatens to draw me back into a life in music – further details of which are outlined below.
Throughout the ‘Cassette experiment’s’ lifetime I feel I’ve made a very strong case for De la Soul having recorded the best hip-hop album ever made. I’ve also made a cheeky (and, let’s be honest, scurrilous) claim that the Beastie Boys ‘Licensed to ill’ is one of the few truly ‘game-changing’ musical recordings.
The Beastie Boys’ debut album was released in the wake of our cassette of the day, Run-D.M.C.’s third and possibly best, album, the gloriously raucous and aptly titled ‘Raising Hell’ and I like to think of these two albums as the cornerstones of mid-1980s hip-hop, when the genre was mischievously naughty rather than downright nasty.
‘Raising Hell’ was the first major commercially successful album to mix rock and hip-hop, most obviously on the internationally known collaboration with Aerosmith ‘Walk this way’. Rock influences abound elsewhere too, with ‘It’s tricky’ ‘borrowing’ heavily from The Knack’s power-pop classic ‘My Sharona’, but as far as I’m concerned it’s the title track where the highest highs are well and truly hit.
Special mention for the wonderful ‘My Adidas’ which includes the immortal lines ‘I stepped on stage at Live Aid, All the people gave and the poor got paid’. I own a pair of Adidas’ finest vintage (a.k.a. old) ‘Comptown’ trainers in beige and fluorescent green and can never resist the urge to break into a tuneless rendition of ‘My Adidas’ whenever I put them on.
But the tune that inspires me to another foray into musicality is the penultimate track on side 1. ‘Is it live’ displays such wonderful bongos (they can’t touch you for it!) that I’m always tempted to rifle through our dusty loft in search of my trusty Nintendo* ‘Donkey Konga’ drums and rattle off a little riff. Maybe my musical days aren’t as far behind me as I thought.
Label – London
Year – 1986
*Other bongo drum manufacturers are available.

You can buy the Kindle book ‘The great cassette experiment - The Joy of Cassettes'. Just get yourself over to Amazon and hunt it down!