The Music Room - of Montreal 'Lousy with Sylvianbriar' review 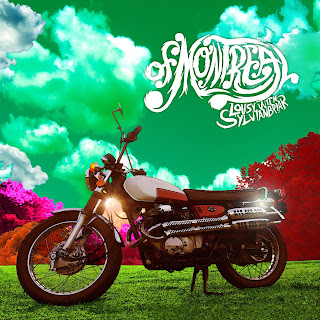 We all know that there are musicians out there, some of them extremely and, let’s be honest, inexplicably successful, who are happy to trot out barely differing versions of the very same mundane albums over and over again. At the opposite end of the spectrum there are the sometimes less commercially successful artists who like to take a risk, to go out on a limb even, to constantly entice and sometimes even challenge the boundaries of music. of Montreal’s founder and frontman Kevin Barnes has pitched his very brightly coloured tent firmly in this second camp. Kevin recently recalled the very deliberate process of stripping back the layers to come up with their swiftly written and briskly recorded new album, Lousy With Sylvianbriar.
Kevin told me that he went to San Francisco around a month before he was due to start recording, where he spent three weeks writing most of the material before returning to his home studio in Athens, Georgia. There he gathered together an exciting group of new musicians, some of whom he’d never even met before, and recorded the album in just two weeks to an analogue 24-track tape machine. “It all happened in this really organic way’ Kevin explained, ‘it could have been a disaster but it worked out really well.”
“The inspiration was definitely bands from the late sixties and early seventies” Kevin continued, before quoting a list of the albums that acted both as an inspiration for the back to basics recording process and the overall theme. If I tell you that this list included Bring it All Back Home, Blonde on Blonde and John Wesley Harding by Bob Dylan, American Beauty and Workingman’s Dead by Grateful Dead, Beggar’s Banquet and Let it Bleed by The Rolling Stones and the solo recordings of Gram Parsons then you’ll get a very good idea of the tradition in whose footsteps this album follows.
“I like the fact that you can’t hide behind anything with analogue recording” Kevin continued,”you can feel the energy of the people in the room. What appeals to me is the immediacy, you have to make quick decisions that you have to live with.”
“So, with influences like that”, you’re asking yourselves, “is it any good?”
If you’ve never heard of Montreal before then this is a great place to start. And if you have heard them before then this is every bit as good as, but very different to, their considerable previous body of work.
To Kevin’s credit it is certainly an album that succeeds in capturing the immediacy of the recording process. The influences of Dylan, The Stones and Gram Parsons inform but don’t overshadow any of the tunes here. Another of Kevin’s musical heroes, David Bowie is also strongly felt and there are a number of tracks here of which David himself would be extremely proud.
I’ve lived with this album for a few weeks now and none of its charms are wearing off. My favourite track during week one was ‘Belle Glade Missionaries’, which has such a nagging, lolloping hook that it’s difficult not to be totally drawn to it. Week two saw the rise of ‘Raindrop in my skull’ a beautiful, largely acoustic number on which Kevin shares vocal duties with Rebecca Cash to devastatingly tuneful effect. Week three was the week when ‘Obsidian Currents’ stepped forward to volunteer for the ‘top tune’ slot. It’s the last of these three that will undoubtedly be regarded as Lousy With Sylvianbriar’s finest tune once the dust finally settles.
Excitingly, for me at least if no-one else, the album is released not only on the usual dull CD and mp3 formats, but also in limited numbers on 180 gram sea glass green vinyl and, wait for it…, cassette tape.


When the end of year ‘best of’ lists are written I would love to think that Lousy with Sylvianbriar will feature very prominently in many of them. It’ll certainly be riding very high in mine. 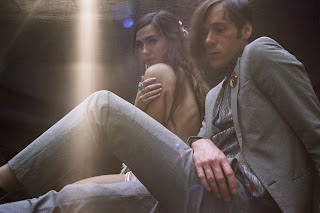 Don't forget you can get yourself a copy of the only mildly amusing 'The Great Cassette Experiment - The Joy of Cassettes' on your Kindle.