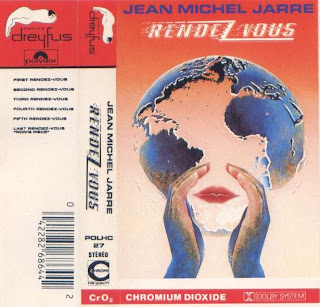 When the New Town of Washington (that’s Tyne and Wear, not D.C.) was planned and constructed, somebody, somewhere, took the decision that the districts wouldn’t only have names but they would have numbers too. In itself this would have presented no great problem, but then it was further decided that the new road signs on the new roads in the New Town would display the district numbers rather than the district names.
This was all well and good if you knew the number of the district you were aiming for, but for all others, reaching your destination in Washington became a bit of a living nightmare with successful navigation largely dependent on pure dumb luck.
Writing about a Jean Michel Jarre album can present similar problems as Jean Michel has a barely wavering penchant for track numbers rather than track names.
For example, our cassette of the day, Jean Michel Jarre’s 1986 release ‘Rendez-vous’ has six tracks* named ‘First rendez-vous’, ‘Second rendez-vous’ etc., with only the ‘Last rendez-vous’ bucking the trend by virtue of its appendage ‘Ron’s piece’.
‘First…’ and ‘Second….’ are essentially two sides of a very similar coin, with a downbeat front-end and an excitable back-end, the tracks feature a dominant church organ and what seems to be an angel’s choir. I have a vision of Rick Wakeman in a cape when I hear these two.
‘Third….’ Seems to be an unremarkable 1986 re-imagining of a track from the soundtrack to a 1950s spy film.
Things ‘hot-up’ considerably on side 2 with ‘Fourth….’ being the kind of upbeat, uplifting electronic instrumental that would cause fans of Daft Punk to wet themselves. I turned this particular tune up to such a volume in the car that the windscreen almost popped out (just like they used to in 1970s Allegro’s when you changed a wheel).
‘Fifth….’ is a messy mish-mash that starts reasonably strongly with what sounds like a 1980s nuisance telephone call (when nuisance calls meant heavy breathing rather than repeated offers to secure a PPI payout on your behalf) but then seems to borrow variously from
1.    the previous track
2.    a tune from a 1980s computer game
3.    a little piece similar to a Depeche Mode b-side (you know the ones – experimental, but not a great deal in the way of melody)
‘Last rendez-vous “Ron’s piece”’ was written for the astronaut Ron McNair to play on his saxophone while in the Challenger space shuttle. As we now know, Ron and his colleagues were killed in the Challenger tragedy soon after take-off. Musically, as you would probably expect, it’s a very sombre affair and the album is actually dedicated to the memory of Ron and his fellow crew members.
Incidentally, in recent years the Washington road signs have gradually been replaced by new signs that show district names rather than district numbers. Progress of sorts, I guess. It’s certainly easier to find your way to Donwell, Usworth, Concord, Crowther, Blackfell, Mount Pleasant, Sulgrave, Albany, Glebe, Barmston, Biddick, Columbia, Oxclose, Ayton, Lambton, Fatfield, Harraton and Washington Village now.
Label – Polydor/Disques Dreyfus
Year – 1986
*which is always a good thing.

Why not check out the fantastic jmjarrefan.wordpress.com - I love it and I suspect that you will too!