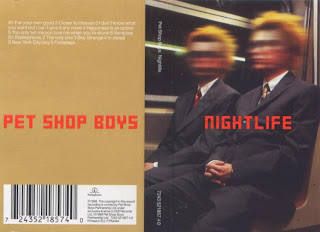 I love regional accents. I think they’re our own little rebellion against the ruling elite and I just love to see the look of disdain on certain people’s faces when confronted with an accent that falls just the slightest bit short of ‘cut glass’.

Earlier this week, BBC Breakfast presenter Steph McGovern revealed that she regularly receives abuse as a result of her Teesside accent. In fact if you type the words ‘Steph’, ‘McGovern’ and ‘accent’ into a well known search engine (I think you know the one I mean) you’ll receive approximately 141,000 results*. In fact Steph herself says that after one BBC job interview she was told, ‘I didn’t realise people like you were clever’.

It may sadden you further to know that if you type the words ‘Steph’, ‘McGovern’ and ‘legs’ into the same search engine you’ll find around 31,600 results. Apparently. So I’m told.

Our cassette of the day today features perhaps two of the best regional accents in popular music – the wonderful Blackpool tones of Chris Lowe and the fabulous and (let’s be honest) slightly posh North Shields via Gosforth lilt of Neil Tennant. Collectively they’re the Pet Shop Boys and they’re the artists behind the most recent album to be featured on the cassette experiment, 1999’s ‘Nightlife’.

Because this is such a recent album (in 1999 cassettes seemed to be only stocked by music shops to appease the luddites who hadn’t made the inevitable transition to CDs or, in my case still only had a car with a cassette player) I will have to be honest and admit that when it was consigned to the loft it was still relatively fresh and I hadn’t really had the chance to make its proper acquaintance. Gradually, over the last few weeks, we’ve grown to know each other again.

Now as we know, ‘visuals’ have always been very important to the boys, so I’d better let you know that this is the album that features them on the tube (or possibly, I like to think, the Tyneside Metro) wearing wigs made from the kind of inflammable fur that was last seen upholstering the seats of a Vauxhall Viva (HC if you’re interested) that my Mam bought from a boy-racer in the early 1980s.

The album was recorded using five different producers (if you count the boys themselves as two, and I know that I do) and this gives it either a varied or disjointed sound, depending on your point of view. However, when I tell you that the other producers are Craig Armstrong, Rollo and David Morales you’ll start to appreciate the quality of the assembled personnel here.

Kylie Minogue appears to great effect on the touching ‘In denial’ in which a man comes out to his daughter. It’s only the second recorded instance of Kylie in my collection – the first being alongside Nick Cave.

Other highpoints are the single ‘You only tell me you love me when you’re drunk’ which is a far more thoughtful tune than its title would suggest and ‘Happiness is an option’ which features Neil’s ‘posh Gosforth’ spoken lyric accompanied by a disco beat and a musical theme by Rachmaninoff - and a very impressive combination it is too.

And ‘New York City Boy’ is the kind of crunching disco track that could only be contemplated by a band equally acquainted with The Village People, Dan Hartman, Donna Summer’s (and Brooklyn Dream’s) ‘Heaven knows’ and the complete back catalogue of messrs Stock, Aitken and Waterman. If that makes ‘New York City Boy’ sound big and camp and flamboyantly wonderful then my work here is done!

You surely know the score by now! - You can subscribe to this blog on your Kindle – just 99p a month gets you lots of waffly posts just like this one - Just look up 'For the love of vinyl (….and cassettes!)’ and Bob is your Uncle, or…
You can buy the Kindle book ‘The great cassette experiment - The first 40 days' by following the link below;
http://www.amazon.co.uk/dp/B00CJ9X7R8
Thanks for reading!