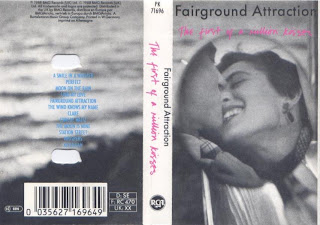 Way back in 1988 we had a family holiday in the Yorkshire Dales. One car full and one van full (my 1983 ex-gas board Morris Ital bought for £595 at Sunderland Motor Auctions still painted 'gas board blue' and in full base level spec with cardboard door panels and no hub caps), we all travelled down to a cottage in Leyburn unaware of the fortnight that lay ahead.

Within a day or two of our arrival, one of our number had to be taken to Scarborough general hospital and the rest of the fortnight was spent 'commuting' from Leyburn to Scarborough via the notorious but beautiful 'caravans not allowed' Sutton Bank.

As so often happens on holidays like this, one album tends to become your unofficial soundtrack, and our 1988 hospital run tape is our cassette of the day today - 'The first of a million kisses' by Fairground Attraction.

It's a little while since we've had a cassette from the 'dreadzone' (the pile of cassettes that I fear may not have stood the test of time), so I approached this particular one with some trepidation, worried that the intervening quarter of a century may have placed a metaphorical layer of dust over its charms.

And of course, as has been the case many times before, my fears turned out to be totally misplaced, as this 25 year-old album sounded as fresh and full of vitality as it did on those struggles between machine and nature on Sutton Bank.

The best known tune here, of course, is the big summer No. 1 hit, 'Perfect' - nigh on ubiquitous in 1988 and as an upbeat, life-affirming chunk of pure pop it's pretty much unbeatable.

There are many other pop classics here too though, in fact side 2's 'Station Street' is the only real misfire. 'Find my love' and 'Clare' are both chirpy and fabulously cheerful, however the album's two best tracks by a country mile are the closing tunes on both sides. Side 1's closer is 'The wind knows my name' which doesn't have a single word or note that's out of place and side 2's closer is the wonderful, haunting 'Allelujah', which is the track from which the album's title is hewn.

Fairground Attraction shone only briefly but very brightly at the time - however, this is one of the 1980s most overlooked pop classics.


You can now subscribe to this blog on your Kindle – Just look up 'For the love of vinyl (….and cassettes!)’ and sign away 99p a month and it’s all yours, or…
You can buy the Kindle book ‘The great cassette experiment - The first 40 days' by following the link below;
http://www.amazon.co.uk/dp/B00CJ9X7R8
Thanks for reading!
Posted by Unknown at 04:00