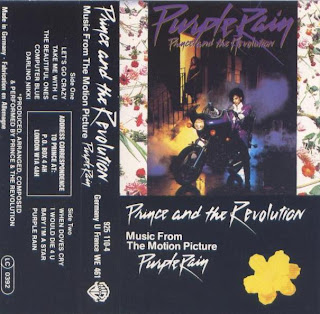 It's almost impossible now, in what we like to call 2013, to buy an album without a 'Parental guidance' sticker, so potty mouthed and sex-obsessed are our current batch of musical performers.

But it wasn't always so - in fact, in the '60s, '70s and early '80s pop music was a fairly wholesome affair. Of course we'd had things like 'Je t'aime moi non plus', 'Love to love you baby' and Max Romeo's notorious 'Wet dream' (which is about putting a new roof on a house, according to Max) but records like these were the exception rather than the rule.

In 1984, musical history was changed forever by the unlikely double act of Prince (Rogers Nelson) and Tipper (Gore). Prince, the little tinker, who had experimented with sailing close to the wind before, recorded 'Darling Nikki' about a sex fiend who lives in a castle and likes to please herself. Tipper fairly swiftly took the moral high ground and, to cut a long story short, decided with a bunch of friends that it would be a good idea to warn the parents of potentially corruptible youngsters that music with stickers could be bad for you.

The (literally) offending tune, 'Darling Nikki' features prominently on our cassette of the day today - 'Music from the motion picture 'Purple Rain'' by Prince and the Revolution.

It's a big, brash, noisy album and it's the one that brought us the revolutionary, bass-less, 'When doves cry' the track featuring Prince in his best Little Richard mode has lost little of its vitality in almost 30 years and still gave me goosebumps when I listened to it, turned up loud, again today. The title track too has survived countless cover versions, karaoke manglings and X-factor murderings to survive loud and proud well into the 21st century.

And 'The Beautiful Ones' is one of those classic, smouldering Prince love songs that tends to be a little overlooked - if it had been recorded by anyone else you'd hear it on the radio three times every day.

One little word of warning before I leave, though - on an album of very fine quality tunes, 'Computer Blue' sounds like it comes from the soundtrack of a poor 1980s film, and of course, ironically, it does.