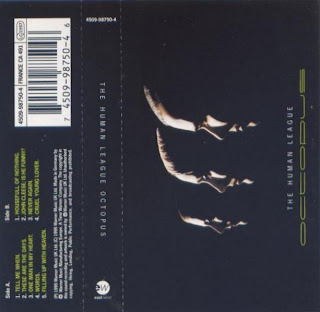 Yesterday we discussed how one of the biggest bands of the 1980s (The Human League) handed over creative control of their 1986 album ('Crash') to two of the biggest producers of the decade (Jimmy Jam and Terry Lewis) and ended up with a right royal dog's breakfast. I thought it only fair to let Sheffield's finest get straight back on their horses today and consider their next-but-one album, 1995's 'Octopus'.

Just like 'Crash', 'Octopus' is another Human League offering that wasn't universally well received. In fact, in one review in The Chicago Tribune it was criticised as lacking the 'poisoned dourness' that gave 'Dare' its heart. In fairness to The Tribune and to the band that's probably accurate, but there's actually a lot to like about 'Octopus' even if it doesn't quite match up to their early '80s best.

I've always thought that The Human League harboured a not so well-hidden wish to be ABBA, and it's in the shape of this album's high point, 'One man in my heart', with Susan wonderfully stepping up to take the lead vocal, that they get closest to realising their ambition.
'Words' is a little beauty too, with its minimal arrangement, deadpan vocal delivery and fantastically clunky League lyrics (fabulously rhyming propaganda, Alexandra and memoranda at one point) it could quite easily be a lost track from the sessions that resulted in the classics 'Reproduction' or 'Travelogue'. And unlike the other tracks it does have that elusive 'dourness'.

And if upbeat Human League is your personal preference, then the chirpy closing track on side 1, 'Filling up with heaven' might just be your bag, baby. 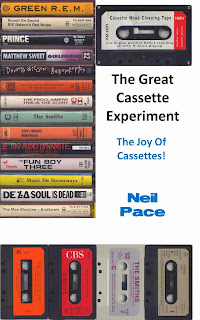 Have you ever wondered what would happen if you only listened to cassettes for six months? I thought not. But I can tell you what happened when I did.

On day 1 I discovered that not all DJs go to heaven.

On day 9 I visited the very soon to be defunct HMV store in Durham and resisted the temptation to buy a CD.

On day 23 I decided on the colour for my (proposed) music room.

Following the choice of a new Pope I made a musical confession on day 29.

By day 37 I was pondering life as a bit of a hellraiser.

On day 47 I mulled over the similarity of Bryan Ferry's moustache and the one sported by Private Walker in Dad's Army.

Day 56 saw me nailing my colours to the mast of the greatest hip-hop album ever made (and by day 81 I'd changed my mind).

On a trip to South Bank, Cleveland (UK not USA) on day 74 I was pleasantly surprised by an album I'd been dreading.

Day 95 introduced the concept of the game-changing album in the company of a group of very talented Germans.

My favourite album of all time showed up on day 100.

My cherished 1985 Mini Mayfair returned to the road on day 105 and ushered in a short spell of 1980s classics by way of celebration, including the opportunity to ponder some very clunky lyrics indeed on day 107.

Al Gore's wife (the wonderfully named Tipper) popped up on day 122 and on day 125 I considered the potential perils of handing over creative control of your album to two of the world's most respected producers only to see the whole shooting match go totally tits up.

Finally on day 130 the entire experiment shuddered to its final destination just like it started, with a brilliant six track electronic classic from the late 1970s.

Oh, and did I mention that I spent a very enjoyable day in the company of a lesbian Tupperware seller?