Cassette experiment day 129 - The Pale Fountains '...From across the kitchen table' 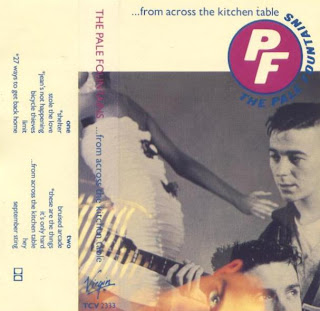 Since the very beginning of the cassette experiment one tape has haunted my thoughts more than any other, ‘…From Across the Kitchen Table’ by The Pale Fountains.

My memory told me that this was a very fine album, and it’s one of the ones that I was most looking forward to re-discovering after around 20 years since my last listen. You’ll know if, like me, you’ve been around since day 23 that on listening again, I felt that another tape had been substituted for the one that I remembered so fondly.

Encouraged by my little brother, whose love for this album is beyond question, I listened again and again and have continued to do so for almost the whole six months. I'm pleased to report that even though this is not a great album (it's not in the same league as The Pale Fountains' masterpiece, 'Pacific Street'*) it's certainly a very good one and I'm here to tell you why.

Following the relative poor sales of ‘Pacific Street’, an album that came with high expectations, Ian Broudie was brought in to produce ‘…From Across the Kitchen Table’ and his ‘sound’ dominates the whole album; it’s not so much Lightning Seeds, but much more Care’s wonderful, soaring forgotten classic ‘Flaming Sword’.

After months of careful consideration, I’m here to tell you that the best tunes here are ‘Jean’s not happening’, ‘These are the things’ and, undoubtedly the album’s high point for me, ‘Bicycle thieves’, which builds and builds as only Ian (and Phil Spector (and Ian McNabb on ‘Head like a rock’)) know how.

I’ve also grown to love the closing track on side 1, ’27 ways to get back home’ and the Teardrop Explodes ‘Reward’-flavoured horns on ‘Bruised arcade’

Strangely though while most of the other 128 cassettes so far have been pleasant to drop in and visit again after so long away, there are only a very small number that I’m happy to continue living with when the experiment finally fizzles out tomorrow. And this is one of them.

*I haven't listened to 'Pacific Street' for years - I hope it's still as good as I remember.

You can now subscribe to this blog on your Kindle – Just look up 'For the love of vinyl (….and cassettes!)’ and sign away 99p a month and it’s all yours, or…
You can buy the Kindle book ‘The great cassette experiment - The first 40 days' by following the link below;
http://www.amazon.co.uk/dp/B00CJ9X7R8
Thanks for reading!
Posted by Unknown at 04:00