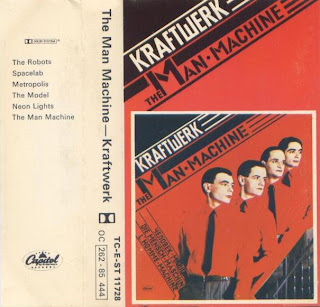 As we finally reach the end of ‘the great cassette experiment’, in which I exclusively listened to music on tape in my car for a whole six months, you might be forgiven for thinking that I’m one of those people whose musical tastes are firmly and forever rooted in a bygone era of mullet haircuts, 12” remixes and embarrassing clothes. In fact, nothing could be further from the truth – I love new music. In fact I think that the current era is something of a golden one for music if you only know where to look and who to listen to.
I also happen to believe that electronic music particularly is experiencing a hey-day not experienced since the late 1970s and early 1980s. If you still don’t believe me then can I suggest that you take the following albums home, all from 2013, listen to them as homework, and tell me what you think of them next week;
·         John Grant      Pale Green Ghosts
·         Phoenix           Bankrupt!
·         Karl Bartos      Off the Record
·         Daft Punk        Random Access Memories
In an experiment that was dominated by music from the 1980s (which, for a while at least, was dominated by electronic music), I consider that most of the real classics of electronic music were actually made in the 1970s. And for our final cassette experiment subject we turn today to one of the greatest of the 1970s electronic albums, the iconic and achingly influential ‘The Man Machine’ by Kraftwerk.
Released in 1978, ‘The Man Machine’ (in conjunction with its older sister ‘Trans-Europe Express’) was an album that caused musical shockwaves throughout the following decade and beyond in a long-term way that punk could have only dreamed of. Clinical without being cold, repetitive without ever becoming boring, all six tracks* have justifiably become classics, with the three tunes on side 2 standing tallest and proudest after 35 (!) years.
‘The Model’ is perhaps the best known track and proved it was way ahead of its time by reaching the top of the UK singles charts three years after the album’s 1978 release. Even though it hails from 1978 it couldn’t be more representative of 1981 if it jumped into an XR3 and drove around all day on £5’s worth of 4-star petrol.
But above all it’s ‘Neon Lights’ that’s my favourite – always was and always will be. Who would have thought that an emotionless vocal with icy electronic backing could be so emotional and beautiful?
Take a look at the fabulous red and black dominated cover and you’ll also realise that while they were never really considered fashion icons, Kraftwerk influenced 1980s fashion too.
Thanks to everyone who has taken the time to read ‘the cassette experiment’ blogs over the last 6 months and for all of the encouragement I’ve received along the way. I hope you’re not too disappointed that we didn’t get a chance to talk about Dr. Calculus or The Critterhill Varmints and I sincerely hope you’ve had as much fun reading as I have writing. I’ll be putting together all 130 posts over the next month or so, checking the spellings and grammar and correcting any inaccuracies, and ultimately releasing the whole lot (with a few extra surprises) as a Kindle book in September. Please keep your eyes peeled – although I will remind you again when the book appears.
I’ll be taking a few days of blog leave now (not too many though!) and will return with…..’The Music Room Blogs’
Watch this space!
Label – Capitol

Thanks for reading!
Posted by Unknown at 04:00